My first memory of this building is in the mid-1930s. The entrance to the building was then located in the front facing Routes 43/66. The side entrance used at present was not in existence at that time.

The front half of the building was used as a United States Post Office. The Postmaster was Pierce Kane. He was father of Helen Kane, later Postmaster at another building in town serving as post office. He was also father of Mary Kane O'Donnell who was a librarian in the Averill Park School system. My parents got their mail there. After a few years Averill Park was given an R.F.D. #1 (Rural Free Delivery) and we had the standard metal mail box near our own home on Burden Lake Road.

In the rear half of the building there was a dry goods store operated by two maiden sisters, Elsie and Edith Werger. The entrance to that store was near where the present door is located in the side toward the rear of the building. The store was stocked with hundreds of items. Some items I remember: shoes, overshoes, sweaters, sewing thread, and supplies, lace, costume jewelry, hair ribbons and accessories, gloves, mittens, hats, embroidery materials and baby items. I remember especially buying a pair of silk baby shoes for my newborn brother in March of 1943. By the year 1943 the post office had been relocated and the space it had occupied in the front was now being used as a drug store. It was operated by Benjamin Silberg. I recall it as being well stocked with health related items and personal care items such as hot water bottles, tooth powder, shaving needs, etc. I don't recall any food items being sold in that store. Out-of-town doctors usually gave pills or cough syrup, etc., along with an office call or home call.

One year, Mr. Silberg decided to boost business by running a contest especially for the young people of the town. He displayed many items on a high shelf along one wall of the store. The prized item was a shiny red bicycle. There were many lesser items such as baseball gloves, skates, cameras, toy air planes, dolls and lots more. Each item was assigned a number of points. Those who wanted to earn one of the prizes could do so by selling items Mr. Silberg supplied. I remember specifically lovely smelling face soaps, Christmas cards and packets of garden seeds. I really wanted that bike and did a lot of hard work going door to door. My dad even drove my brother and me to Nassau and we knocked on doors there also. I didn't earn the bike but I did get a bakelite Brownie camera. I used that camera a great deal until Kodak stopped making film size 127.

About 1943, Mr. Silberg relocated his drug store to the building that had housed Frank Sowalski's Ice Cream Shop on Main Street.

The structure at Burden Lake Road and Routes 43/66 was purchased by John and Elva Shaudt. In about 1946 I began working there. They utilized the entire building as a Variety Store. There was a marble ice cream fountain and four high backed wooden booths along the left wall. The opposite wall was floor to ceiling shelves where all sorts of grocery items were displayed. In the center were several oak and glass display cases where "variety" was displayed. They stocked all sorts of gift items such as jewelry, lace collars, perfumes, hair adornments, knick knacks and boxed candy. There was a meat counter. They sold beer and soda also - no beer until noon on Sunday and no kids were allowed to purchase beer or cigarettes for dads. They also stocked bread and bakery items.

The store was kept immaculately clean. I worked from approximately 1946 through 1948 when I graduated from High School. One of my duties was dusting some areas of the store everyday using a feather duster. My other duty was manning the ice cream fountain and being a waitress. The Schaudt's niece Barbara was an orphan and lived with John and Elvira. She worked at the fountain also. The family lived upstairs. It was one huge room with a few curtain partitions. 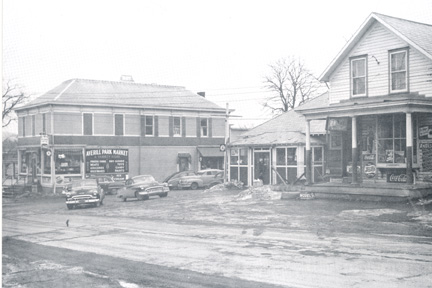 Some time after 1948 the building was sold to Ray and Vera Eastman and Ray's father. Sometime during the Eastman tenure the front entrance was removed and the present side door was installed. I don't know exactly when the fountain and tables were removed to make room for more of the items needed day to day such as yarn, table oilcloth, window shades, school supplies, magazines, etc. I believe the Eastmans concentrated more on meat business also as the senior Mr. Eastman was a butcher. I worked there at the cash register briefly in 1957 but found that I was needed more at home with my then three children. The store remained this way for many years.

The building that currently houses Young's Pharmacy and General Store is not recorded on F.W. Beers' 1876 map of Sand Lake, but was probably built soon thereafter on the site of a structure owned by blacksmith James G. Payne. It shares several architectural features (dentil molding; scallop shingles; mansard roof with Philadelphia gutters) with the large mansard-roofed house on Burden Lake Road built by Nicholas T. Kane after 1880 when he took over the management of the James Akin Hosiery Mill. [SEE: Sand Lake -- Mill Town?]

The proud edifice has housed many businesses over the years, including: the post office in the front half with a door onto Route 43 and a dry goods store in the back opening onto Burden Lake Road. Elsie and Edith Werger and Jake Wargar, ran the dry goods half at different times. When the post office was moved, the front became Benjamin Silberg's Drug Store before he opened Park Pharmacy down the street. John and Elva Shaudt then operated the whole building as a variety store (ice cream parlor, groceries, notions, clothing) and lived upstairs. They sold to Ray and Vera Eastman and Ray's father, who was a master butcher.

When Bob and Renee Phaneuf bought the building in 2005, their first concern was to restore the handsome mercantile structure which had become quite dilapidated -- a labor of love more costly and time-consuming than they'd anticipated. Outside, from the top down, they rebuilt the glass cupola-style skylight, and made extensive repairs to the slate roof with its tricky, integral Philadelphia-style gutters. Many of the wall clapboards needed replacing, as did hundreds of the scalloped cedar siding shingles, which had to be cut by hand. Several of the old windows had been boarded up, and they were opened again, replacing glass and replicating the original moldings. Modern doors were replaced with a handsome oak set rescued from an Albany school. A paint scheme in two colors of sage green plus ivory was chosen to set off these architectural details while being historically correct.

Inside, from the bottom up, they removed a mass of garbage and broken fixtures from the basement, cleaned, painted and installed a wonderfully smooth new concrete floor. On the main level, they sanded the hardwood floors, cleaned and restored all the store furnishings and bought historic new pieces from Albany's architectural salvage. The old kitchen area was completely redesigned with a classic black and white tile floor, cleaning and using what old fixtures were possible and buying others. They put in new lighting that harmonized with the old general store feeling. Upstairs, they removed the recent room dividers to restore the meeting hall to its original glory: windows on three sides and bead board wainscoting on walls and ceiling (Dede Neremberg's weaving studio occupies the space now). They sanded the floors, renovated the bathroom and two other rooms for offices.

In restoring the building to its proud place as architectural centerpiece to commercial Main Street, the Phaneufs were also committed to the revival of the old-fashioned general store: a meeting place for the community to buy their essentials (like the daily paper, bread, coffee, beer, milk, cigarettes) and specialties (like pies, muffins, cookies baked on the premises, take-out or eat-in deli food). They concentrated on offering healthier and more local choices: milk in glass bottles from a nearby dairy, organic meats and cheeses from local farms, a huge selection of imported and micro-brewed beers and much more.

NOTE: Since this article was written, Bob and Renee sold the store to Miller and Stephanie Young, who reopened it in mid-2007 as Young's Pharmacy and General Store.

If you haven't been to the store lately, stop in - and take pride in one of the most beautiful historic renovations and retail spaces in the state.right in our town.

Clare Radz also provides us with this information and clarifies the location of the place where Jerry Lewis was a soda jerk when he lived in Averill Park.

My husband, Don Radz, attended Averill Park High School from September 1941 to June 1945. He recalled that during his sophomore year Jerry Lewis became a student at the High School. He attended one school year.

Don rode on the same school bus as Jerry and he recalls that he always got off the bus at Silberg's store. He did work behind the ice cream counter. The drug store was then located on Main Street where there is now in operation a pizza parlor. The business was owned by Ben and Irma Silberg. In addition to the usual drug business, Mr. Silberg made all the ice cream sold at the fountain from recipes purchased with the building from Mr. Frank Sowalski. 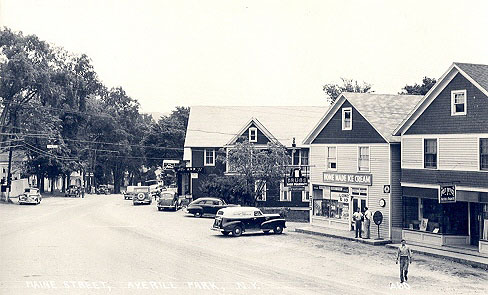 I have conferred with Barbara Blassberg, daughter of the Silbergs, and she believes these are the correct facts.